History of B’nai Shalom and our Ark

In the ’60s and ’70s, Jewish families seeking quality education, affordable housing and a suburban lifestyle began moving to Buffalo Grove . As the population increased, the educational and religious needs of the Jewish community increased as well.  A school run by the Associated Talmud Torahs was set up to serve these needs.

Before 1977, Beth Judea, a conservative congregation in Long Grove and Temple Chai, a Reform congregation in Arlington Heights were the only shuls. The eight families desiring a traditional setting for Jewish services conducted High Holiday services at the Raupp Memorial Building in Buffalo Grove in 1977. This small group began conducting monthly Friday night services and as the number of families grew to 35 in 1979, 70 in 1980 and 125 in 1981, services in a variety of community centers and park district clubhouses were held every Friday night. The first High Holiday services in the Aptakisic Road building were held in 1988 for the membership of 270 families.

History of our Ark 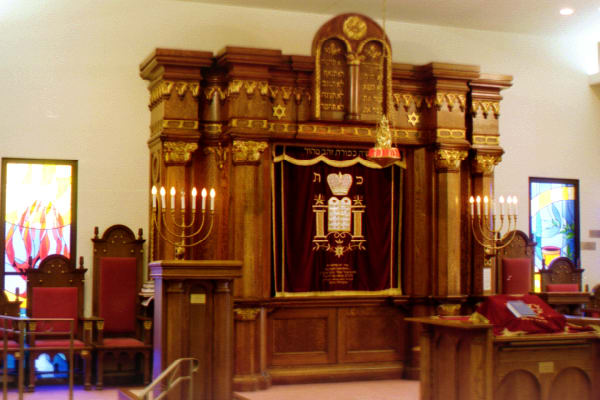 In the early 1900s, European artisans designed and constructed an ark for a new synagogue in Albany Park, Chicago. In 1980, Albany Park Hebrew Congregation was about to close, and Congregation B’nai Shalom was in its infancy in Buffalo Grove. Albany park provided B’nai Shalom with a Torah and some Bimah furniture, but the ark was thought to be permanently installed.

B’nai Shalom was told it was ours if we could remove it, and so we did. The ark was broken down into its many pieces and placed in storage awaiting construction of our permanent building eight years later.

B’nai Shalom’s use of the ark incorporates both a work of art and the maintenance of tradition and inheritance of Jewish culture from one generation to the next. The ark was reconfigured and refurbished for its current installation. The woodwork, door and base are original. Gold leaf has been added. The two menorahs had not been operational for decades, but were repaired before being installed.

Our sanctuary features ten stained glass windows designed by the reknowned artist, Eugene Potente of Kenosha, WI. They use imported stained glass from Holland, France, England and the US. 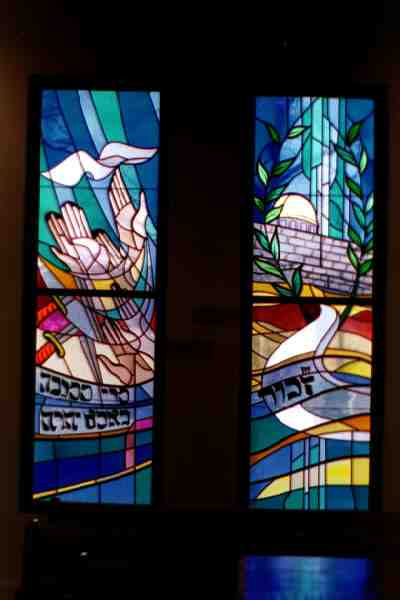 The left panel illustrates Messianic Hope, people reaching out to create a better and more peaceful world. The right panel shows the ashes of the Holocaust, out of which is a road leading to the Wailing Wall in Jerusalem. 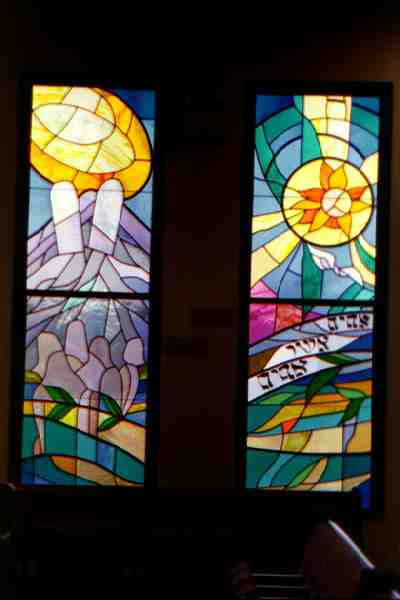 The left panel shows the Children of Israel assembled before G-d at Mt. Sinai to receive the Ten Commandments. The right panel shows fruition of G-d’s laws. 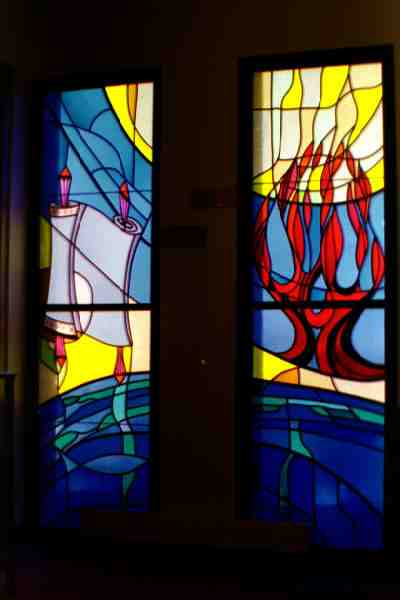 The left panel represents the law of the Torah, while the right shows the burning bush. At the bottom of both scenes, you can see the curvature of the earth as seen from space, while at the top, you have the golden brightness of the sun. All of this is intended to show the extent of G-d’s universe.